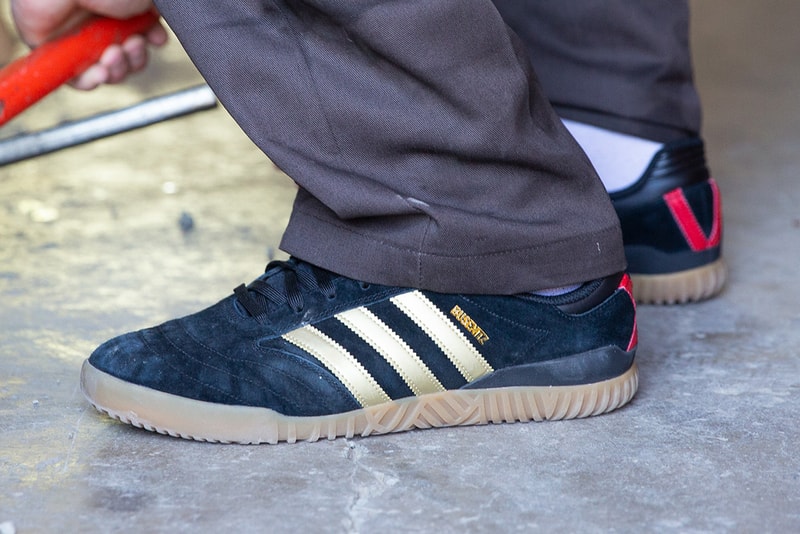 It’s been 15 years since Dennis Busenitz and adidas first announced their partnership, so the tenured skateboarder and adidas Skateboarding are celebrating the milestone with a new iteration of the Busenitz Indoor Super. Inspired by an indoor squash model from the ’80s, the Busenitz Indoor Super retains plenty of classic adidas Originals flair but adds skate-ready tweaks to ensure it’s ready to withstand even the most strenuous street session.

Crafted from black perforated suede and adorned with a gold Three Stripe graphic plus a gold Busenitz hit and nylon overlays, the shoe’s upper promises enhanced durability. It also features a lengthy tongue — a la Busenitz’s famed adidas Busenitz, a skate-ified version of the adidas Samba — that’s held in place with nylon straps. Heels feature red leather “X” and “V” hits for a nod to the 15-year partnership, and grippy gum outsoles complete the look by offering a combination of board feel and cushioning.

“In a world of 15 seconds, 15 years is truly something special,” said Busentiz himself. “I’m looking forward to another 15 years of fun with adidas Skateboarding through traveling, skating and making good shoes.”

The 15-year adidas Busenitz Indoor Super will release via the adidas webstore and adidas Skateboarding stockists on August 7. Its MSRP is set at $100 USD.

Moving from skateboarding to lifestyle, Y-3 has unveiled two new silhouettes: the QISAN COZY and the Y-3 AJATU RUN.