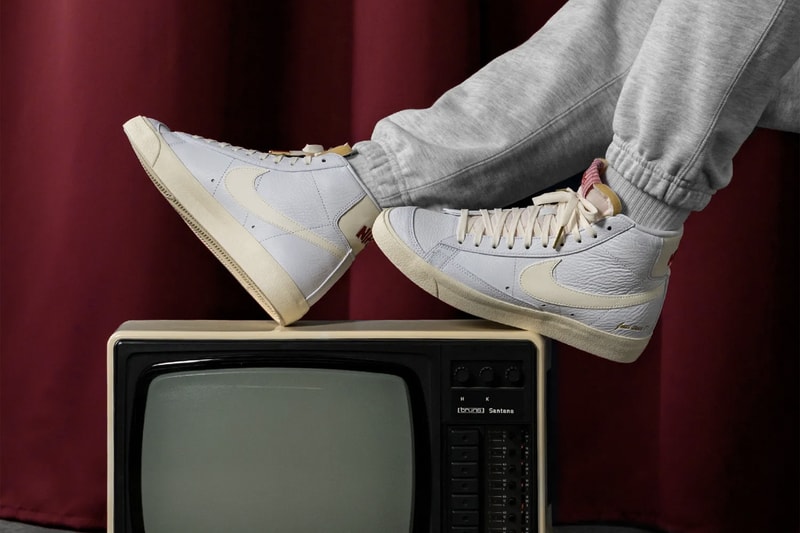 Earlier this month, Nike told its design team to really let their creative juices flow and the result was the hugely popular Air Force 1 “Popcorn.” Now, the sportswear giant continues the theme with its latest Blazer Mid ’77 Vintage, once more buttering up the pair in more than just one way with a similar “Popcorn” makeover in a “White/Coconut Milk” colorway.

Firstly, the “White/Coconut Milk” colorway that adorns the premium and incredibly buttery leather used on the Blazer is a different shade to the “Coconut Milk” hue on the AF1. Here, it appears in a blue tone, but that’s no bother as it only adds to the retro theme that details the pair and bring in its familiar “Popcorn” touches.

For example, Nike’s “Fresh Since ’77” slogan acts as a double entendre and appears in cursive metallic gold stamped lettering on the lateral rear-quarter, while other retro touches come in the form of a tongue tag that looks like a bag of popcorn, sitting well against the exposed foam tongue.

Chrome red embroidery reading off Nike’s moniker on the creamy leather heel tab is yet another retro touch, and leads the eye back round to the similarly-toned Swoosh where you’ll notice a golden popcorn pendant handing from the eyelets. Once more, this premium detail is joined by other luxe touches such as the cream laces that run over the tongue.

Unlike its accompanying AF1, the Nike Blazer Mid ’77 Vintage “Popcorn” is set to be a bit easier to cop — however, by no means will this pair sit. The sneaker is set to release on March 9 at retailers such as Asphalt Gold, and will be priced at €109 EUR (approx. $132 USD). Take a closer look at the pair above.

For more daring Nike shoes, check out the ISPA Road Warrior in all its glory in the latest installment of Sole Mates, which this time around features sneaker and product designer Mr. Bailey.