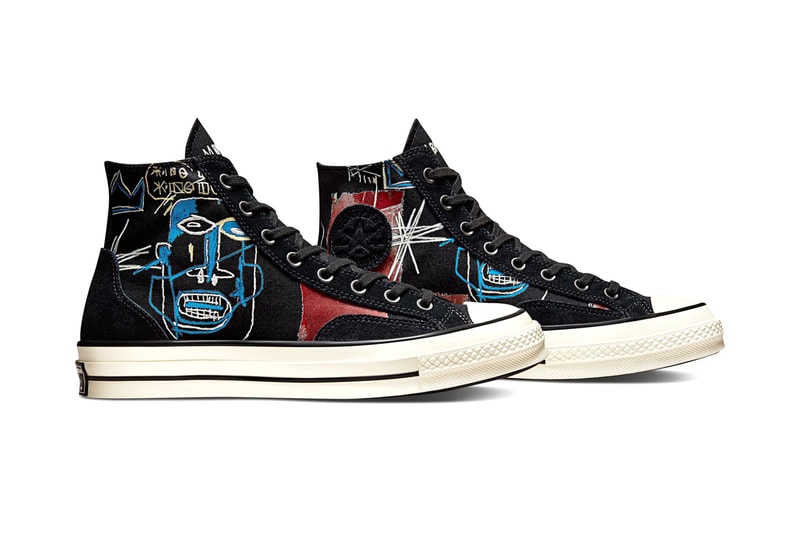 The Estate of the late American artist Jean-Michel Basquiat has recently teamed up with Converse to debut a new capsule collection embodying four of his artworks. From gracing Dr. Martens boots to phone cases from CASETiFY, the neo-expressionist painter has left his trademark on several daily essentials throughout the past few years with his iconic raw and edgy paintings.

Centered around Basquiat’s works such as Kings of Egypt III, Kings of Egypt II, Pez Dispenser and Untitled (World Famous), the series is composed of the iconic Chuck Taylor All Star and Chuck 70, as well as the, resurfaced Skidgrip silhouette with each representing a certain painting. Along with the footwear designs, a lineup of apparel such as crewnecks and t-shirts are coupled in the release.

Customizable variations are also available through the brand’s platform Converse By You. Customers can choose to place either the artist’s prominent crown or Untitled (World Famous) on the uppers of the shoe. The All Star’s patches, canvas, laces, rubber and eyelets can also be tailored to your preferences.

Look out for the global release of the Basquiat x Converse collection on September 16 at select retailers and Converse’s website.

In case you missed it, adidas’ latest Stan Smith golf shoe was inspired by “America’s Dairyland.”